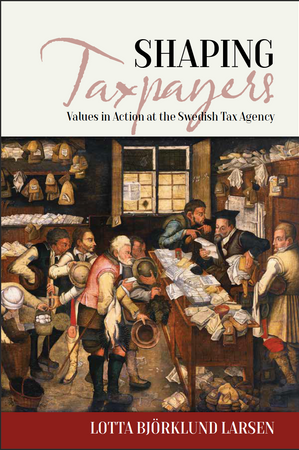 Shaping Taxpayers. Values in Action at the Swedish Tax Agency

Published in 2017 by Berghahn Books

My monograph is an ANT inspired ethnography based on three years of fieldwork at one of Sweden’s most esteemed bureaucracies, the Swedish Tax Agency (STA), from 2010 to 2013.

As taxation is often deemed utterly boring, my aim was to make this ethnography a vivid and intimate account of knowledge-making. I depict a STA that mediates the application of tax law while it vigorously strives to earn legitimacy in society in its collecting of taxes while minimizing tax faults. Although this book is about a government agency and its citizenry, the leading character is a report which is created as the result of a risk assessment project performed at this Agency.

Based on unparalleled and up-close fieldwork, I follow the creation of this report from its inception, through the research phase, over the deliberations on how the finished report should be communicated to the Swedish public, and ultimately during the process of implementing the changes in routines that followed from the report.

The Agency’s project involved hundreds of people, but eventually came up with results that were deemed too controversial for external publication.

Results from the report emerged as a potential threat to the maintenance of the Agency’s credibility, and the legitimacy it had built up over decades was put at risk.

The book follows a risk assessment project from its inception, through the research phase, in presentations throughout the STA to its final abandonment as the results and conclusions reached did not align with the STA's strategies. Following this project reveals how diverse knowledge claims—legal, economic, and cultural—compete to shape taxpayer behaviour.

Voices about the book:

“How tax compliance is shaped merits much more attention than it has received in anthropology and the social sciences. The book offers a wonderful rendering of the true strangeness and contingency of familiar routines – something the best social theory does.”

“Shaping Taxpayers will be a significant, indeed, ground-breaking study that will propel this vein of interdisciplinary scholarship, concerned with social studies of finance, cultural economy, fiscal sociology and bureaucratic practice, into the mainstream.”

Do you have anything to write about taxes? Book review? Your own book announcement? Insights into or reflections on a specific area of tax in society? A short ethnographic vignette that didn't fit into an article but you'd like to share?

Anything you would like to write that relates to tax can be published here!

Please contact me with the form to the right!

Want to be in touch?

Please fill in this form